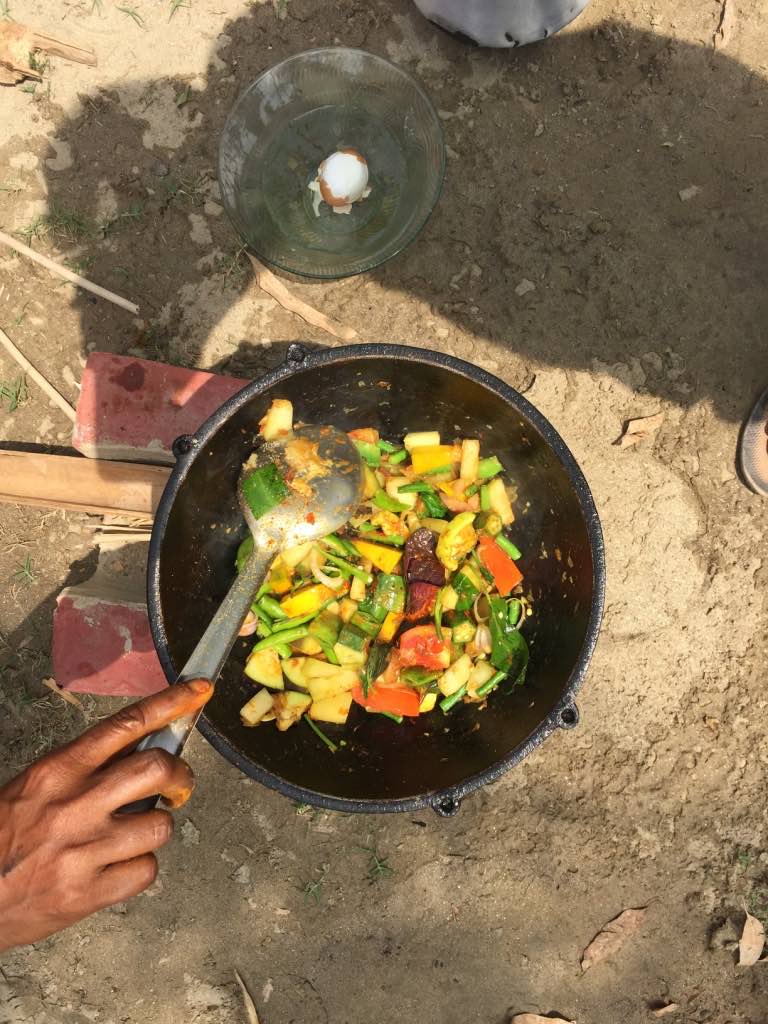 Jamie Oliver is one of the best-known chefs today, mixing traditional British food with world cuisines to create healthy, nutritious meals that are easy for anyone to master. He is the star of TV shows, author of several books, and has various restaurants worldwide. In the northern Bangladeshi village of Mitapukur, however, people have never heard of him. Even if they have, they may not like the dishes he cooks: they’re simply not spicy enough! The goal of our cooking competition last April in Mitapukur was to find the Bangladeshi version of Jamie Oliver – a cook able to prepare healthy and nutritious dishes that people love to cook. You may wonder, and justifiably so: Why organize a cooking competition in Bangladesh? And who is behind this?

The PROOFS project
The cooking competition was organized by PROOFS – an initiative of the three NGOs ICCO, iDE, BoP Inc., funded by the Kingdom of the Netherlands – and supported by Endeva. PROOFS aims to tackle malnutrition by creating “PROfitable Opportunities in the Food Sector”. Working with farmers and individual households, the initiative improves both the supply and the demand side of nutritious food. The latter is particularly important, since malnutrition is not always related to a lack of access to nutritious food. Often, people simply don’t know how diversifying their diet can improve their health – or they maintain bad eating habits due to traditions and beliefs.
Thus, the PROOFS project set out to educate households on how to improve their health, nutrition and hygiene. One core element of its activities is implemented by so-called “Nutrition Sales Agents” – a network of female entrepreneurs who visit households on a regular basis to convey educational messages related to pregnant women, Infant and Young Child Feeding (MIYCF) practice, nutritious and diverse eating habits and proper hygiene. To create sustainable structures, these agents are not paid by the initiative, but make their living from selling nutritious and healthy products, such as micronutrient supplements for children.
Educational work on nutrition is not new – in fact, many organizations have implemented projects on the topic. But very few of them innovate the way health messages are conveyed and, what is even more striking, few check if their messages are actually translated into action. The cooking competition aimed to accomplish exactly that.

The cooking competition
The competition invited participants to submit recipes for healthy and nutritious dishes. It was meant to show that cooking nutritious food is doable and easy. The Nutrition Sales Agents were responsible for both advertising it by distributing educational flyers and collecting the recipes from participants. In addition, the competition was marketed through educational posters put up in the community – and by activating local stakeholders such as the union chairman or the head of the local health department. The 10 women with the best recipes, nominated by their fellow villagers, were then selected to cook and showcase their recipes during a nutrition fair – and receive a brand-new cooking pot as a prize.
Interestingly, the mere chance of winning a prize made people keen to listen to the health messages of the Nutrition Sales Agents in a different way. All of the sudden, they wanted to better understand how many food groups they should include in each meal – or what vitamin- and protein-rich ingredients look like. At the same time, collecting recipes from their target group was an opportunity for the Nutrition Sales Agents to check if their messages are actually being understood.

The nutrition fair
The award ceremony at the nutrition fair was a moment of pride for everybody involved. The nutrition fair was set up by the PROOFS project with the intention of reaching a larger group of people by offering lectures as well as cultural performances such as folk songs and theatre pieces. The performances were full of educational messages around health and nutrition. They were also an alternative form of product placement, showcasing and creating stories around the nutritious and hygiene products that can be bought from the Nutrition Sales Agents.

While Bangladeshis love this type of entertainment, it wasn’t the only reason they came. The cooking competition had created real buzz in the community! In fact, many of the over 1000 community members came to see if their family member, neighbor or friend were amongst the winners of the competition.

If the 10 finalists will become as famous as Jamie Oliver remains to be seen. However, they did appear on Bangladesh national TV, which reported on the innovative event. Their recipes will also be collected in a book, which will be used by Nutrition Sales Agents in their nutrition sessions as a way to empower their target group. The simple but tasty recipes will be used to show that cooking nutritious food is neither difficult nor expensive – and that they themselves have the knowledge and capacity to come up with healthy dishes they can cook for themselves or their families. Perhaps a copy of the recipe book should also be sent to Jamie Oliver – in case he, too, wants to turn up the spice!

The PROOFS project aims to improve the Food and Nutrition Security and WASH situation of 80,000 rural households (HHs) at the Base of the Pyramid (BoP). PROOFS is implemented by ICCO, iDE, BoP Inc. and funded by the Kingdom of the Netherlands. The concept development and implementation of the nutrition fair and the cooking competition was led by BoP Inc., implemented by the locally-based nutrition team of PROOFS as well as supported by Endeva. The nutrition fair and cooking competition will be replicated in all districts PROOFS is active in, aiming to reach 80,000 households/individuals with its educational messages and products.

If you would like to get further information about PROOFS, the nutrition sales agents or the nutrition fair, please contact Wendy van der Klein (vanderklein@bopinc.org).