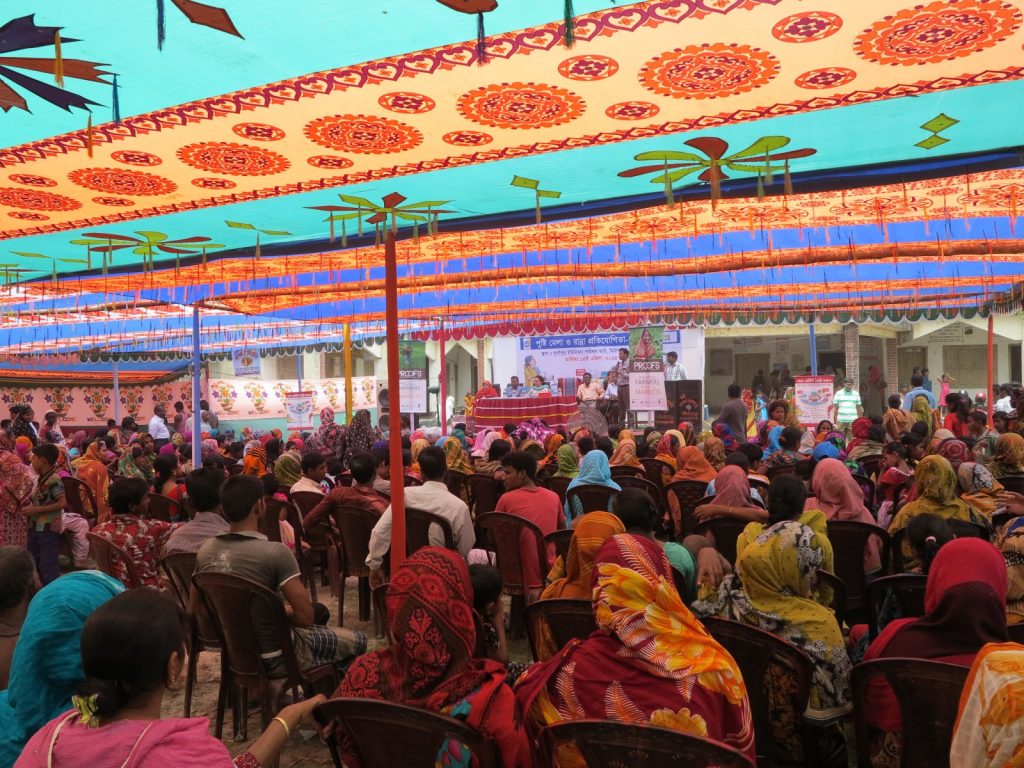 Innovation on Wheels: How the PROOFS project is changing gender roles and nutrition education in rural Bangladesh

Every morning, Lipi cycles down the dusty roads of Mitapukur, a small village in northern Bangladesh, balancing a bag filled with products on her shoulder. Lipi is one of the 160 Nutritional Sales Agents that was trained by the PROOFS (Profitable Opportunities for Food Security) project, an initiative of the three NGOs ICCO, iDE, BoP Inc., funded by the Kingdom of the Netherlands which aims to tackle malnutrition in rural Bangladesh. As a Nutrition Sales Agent, Lipi regularly visits the households in her community to convey basic health messages, such as how to maintain a healthy and balanced diet, the need for hand washing or the health benefits of exclusive breastfeeding. She makes her living from selling affordable products that are nutritious and healthy– such as micronutrient supplements for children.
What sounds like a great idea is actually a very complicated task. Being a Nutritional Sales Agent means much more than introducing products not previously accessible or known to villagers – the female agents also disrupt engrained gender roles in their culture. In rural Bangladesh, women tend not to have a job outside their home. They run the household, take care of their children and occasionally help their husband with the harvest. Before seeing Lipi, most people in Mitapukur had never even seen a women ride a bike.

To ensure that such an innovative approach is accepted, the Nutritional Sales Agents are not left alone. Behind them stands an entire support system: experts from the PROOFS team train agents on educational messages related to pregnant women, Infant and Young Child Feeding (MIYCF) practice, nutritious and diverse eating habits and proper hygiene. They also teach them how to run a small business and connect them to the local private sector that supplies them with suitable products.
In addition, the PROOFS project organized a nutrition fair and a cooking competition in Lipi’s community. The colorful and noisy event had various objectives: First and foremost, it was set up to educate the community on PROOFS core topics related to improving nutrition. In addition, it aimed to make the Nutrition Sales Agents known to a wider group of people and showcase the products they sell, eventually boosting their sales. The cooking competition held at the event, which invited community members to cook nutritious recipes, was meant to empower villagers and give them a sense of participation.

When joining the team as a Nutritional Sales Agent, Lipi had never imagined she would stand on a stage, alongside government high officials, GoB health department representatives, the union chairman as well as private sector representatives to discuss the importance of nutritious food and feeding behavior for better health. But there she was microphone in hand, on a stage of the “nutrition fair”, in front of over 1000 people.

What had attracted most people to the fair, however, was not the inaugural speech. They came to see cultural team that followed. But also the folk songs and theatre pieces they performed served a purpose: they were peppered with educational messages. They were also an alternative form of product placement, showcasing and creating stories around the nutritious and hygiene products that can be bought from the Nutrition Sales Agents.

What Lipi was most proud of, however, was to see her three fellow villagers on stage, being handed a prize by the union chairman. They were the winners of the cooking competition: 10 women, who were nominated by their fellow villagers, competed against each other to cook the most healthy and tasty dish. The competition was set up to have the community actively participate in the fair – and show that cooking nutritious food is doable and easy. For Lipi, it was also a way to see if the villagers she has been educating about how to improve their nutritional status actually got the message.
When Lipi cycled home after the fair, she had a smile on her face. The bag balancing on her shoulders was empty – she sold her whole stock at the fair. And the villagers that saw her leaving did no longer look bewildered. In fact, seeing her cycling was not that strange to them anymore. They now understand that the project Lipi brings to their community is bringing not only new ideas and products to their community, but also new approaches – which should be introduced in a new way.

The PROOFS project aims to improve the Food and Nutrition Security and WASH situation of 80,000 rural households (HHs) at the Base of the Pyramid (BoP). PROOFS is implemented by ICCO, iDE, BoP Inc. and funded by the Kingdom of the Netherlands. The concept development and implementation of the nutrition fair and the cooking competition was led by BoP Inc., implemented by the locally-based nutrition team of PROOFS as well as supported by Endeva. The nutrition fair and cooking competition will be replicated in all districts PROOFS is active in, aiming to reach 80,000 households/individuals with its educational messages and products.
If you would like to get further information about PROOFS, the nutrition sales agents or the nutrition fair, please contact Wendy van der Klein (vanderklein@bopinc.org).