Since Monday, November 30th, 2015, representatives from over 190 countries have been gathering at the 21st United Nations Climate Change Conference in Paris (COP 21) with the imposing goal of developing a legally binding and universal agreement on climate to succeed the Kyoto Protocol.

While the agreement of limiting the global temperature increase to less than 2°C is highly important for the development of our planet, policy makers are aware that it must go hand in hand with strategies to cope with and adapt to the existing adverse consequences of climate change.

Even 2°C warming above pre-industrial temperatures will result in new weather patterns. In fact, people around the globe already experience the consequences in the form of prolonged droughts, heavy rainfalls and increased numbers of tropical storms. We need to prepare for inevitable future impacts of climate change and develop strategies to strengthen the resilience of communities already affected by climate change – especially since these are among the world’s most vulnerable.

Developing countries are more exposed and vulnerable to climate hazards

Increased weather variability, more frequent and intense extreme events, and greater exposure to coastal storm surges will lead to higher risks of catastrophic and irreversible damage, especially in developing countries. The German NGO Brot für die Welt forecasts at least 500 million climate refugees by 2050. The World Bank calculates that between 100 million and 400 million more people will be at risk of hunger if the global temperature rises above 2°C. And 1 billion to 2 billion more people may no longer have enough water to meet their needs. A sea level rise of even one meter would threaten more than 60 million people and $200 billion in assets in developing countries alone.

Without effective adaptation, countries in Africa and South Asia could suffer a 4-5% permanent reduction in annual income per capita driven by impacts in agriculture, a sector that is extremely important for most economies in these countries and highly sensitive to changing climates. 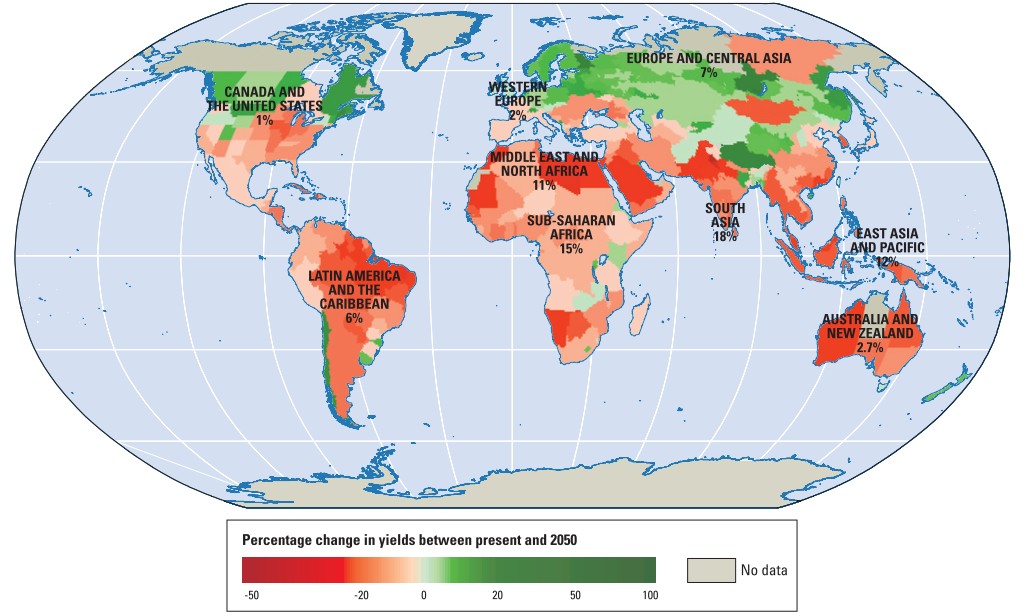 Adaptation is especially important for People at the BoP

People at the Base of the economic Pyramid (BoP) have very limited possibilities to protect themselves against natural hazards, and, what’s even worse, the consequences for low-income communities can be life threatening.

A Kenyan smallholder farmer’s yields are completely destroyed by a long period of drought. An Indonesian fisherman’s house is exterminated after a tropical storm. And a Brazilian worker becomes homeless after landslides caused by torrential rainfalls wipe away his house. Instances like these plague populations at the BoP around the globe every day. They are much more likely to be affected by negative impacts of climate change because: 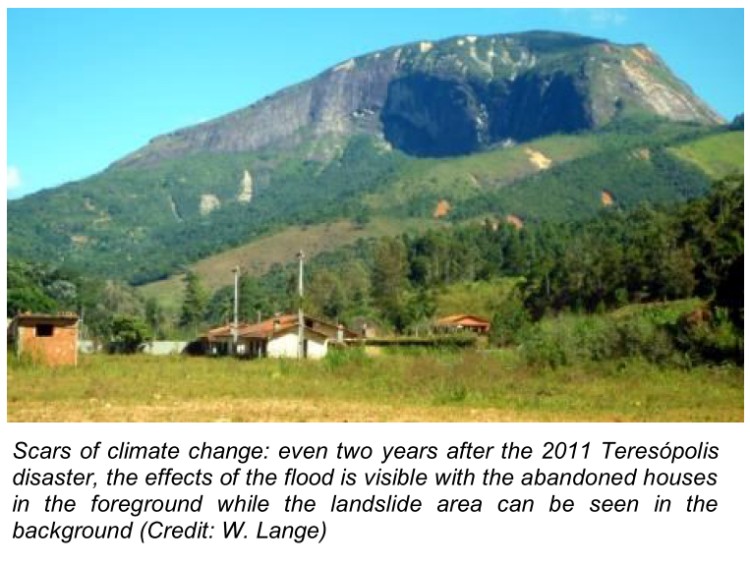 Businesses can increase the adaptive capacity of BoP communities by including them into their value chain as producers or entrepreneurs and providing decent income opportunities and climate knowledge. But they can also directly support people at the BoP to reduce their sensitivity and exposure to climate risks by offering them innovative and affordable adaptation technologies. While adaptive capacity relates to the knowledge and resources needed to effectively adapt to climate change, reduced sensitivity means that people can lower the damage of a climate hazard and reduced exposure that the hazard does not hit the people at all or at least less strong.

How can that work? Take the example of Emanuel Joseph in rural Kenya. He has a family with 4 children and works with his wife on a two acre farm planting maize and beans. Because of increasing drought periods in the region, his yields are almost 50% lower than 10 years ago. And one year ago, he almost lost his entire crop because of heavy rainfalls during planting season. He and his family did not have enough to eat and had to sell valuable assets to survive.

To reduce his sensitivity against climate related hazards like strong rainfalls and droughts, Emanuel Joseph can invest in drought resistant seeds or in affordable drip irrigation technology. He could also purchase an index-based weather insurance that would payout as soon as drought or strong rainfall hits and help the farmer to get back on his feet quickly. The Indian company Jain Irrigation, for example, is market leader in low-cost irrigation technology for smallholder farmers. Jain also offers farmers to buy their produce at either at a pre-agreed sales price or at the current market price – whichever is highest at the time of purchase. A real win-win situation – the arrangement reduces smallholders’ risks and allows them to better calculate their future earnings, while Jain creates a market for its irrigation systems.

In addition, Mr. Joseph could reduce his exposure against strong rainfalls and droughts though agro forestry practices or by purchasing a weather prediction app for this mobile phone. The app would allow him to receive information on upcoming storms and periods of drought and he could adopt the seeding to a less risky time. Weather insurance companies like the Munich Re, for example, provide their clients with timely information about expected events to help them take preventive measures. Mr. Joseph could harvest early, protect his productive assets and reach a shelter in time.

Mr. Joseph’s ability to adapt to climate patterns depends on his knowledge on good agricultural practices and new adaptation technologies as well as his ability to pay for it – both factors that increase his adaptive capacity to deal with climate related hazards. As part of their commitment to sustainably source 100% of their agricultural products by 2020, Unilever partners with the Rainforest Alliance to conserve biodiversity and help smallholder farmers to secure more reliable incomes. In one-to-one training, over 5000 agronomists work with the farmers on sustainability-related topics such as erosion control, waste management and biodiversity conservation. For the company improving the climate resilience of the farmers is an efficient way to strengthen their supply chain.

Businesses like Jain Irrigation and Unilever can scale or replicate innovative solutions and reach a large number of the BoP across the globe. Jain Irrigation sells drip-irrigation technology to over 200,000 smallholders per year and Unilever already trained over 300,000 farmers.

In this series, we will highlight businesses from three industries that are already supporting BoP communities to increase climate resilience: tourism, agriculture, and micro-insurance. We will show how these companies are engaging with the BoP and why this is an integral part of their business strategy.

In the next blog post, we will focus on examples from the tourism industry and see how responsible tourism companies protecting mangrove forests and coral reefs, create demand for high-end tourism experiences in Indonesia and other parts of the world. Stay tuned!

This blogpost was authored by Christian Pirzer and is part of the Practitioner Hub’s series on climate change and inclusive business.

Post Views: 1,379
Previous Post
Think and Drink event: how inclusive products find their way to international markets
Next Post
The Market of Climate Resilience – Protection and Conservation of Natural Ecosystems is at the Heart of Responsible Tourism