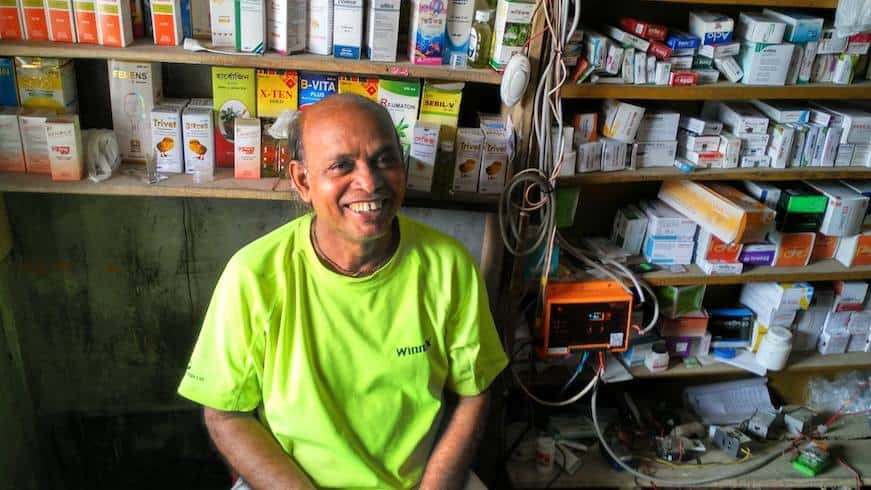 Solar, Expanded: Building the Future of Utilities in Bangladesh

“Bangladesh has been leading the revolution on solar and we are about to pivot to the revolution of utilities,” Sebastian Groh, the founder of Bangladeshi innovative solar startup SOLshare, recently told me at Endeva’s ii2030.

There’s lots of evidence to support his claim. Bangladesh has a staggering 5 million solar home systems installed, thanks to the wildly successful solar dissemination program implemented by the Infrastructure Development Company. At the same time, more than 41% of rural Bangladeshis still lack access to electricity. To address this, SOLshare and its core partner Grameen Shakti have been developing peer-to-peer electricity trading networks of rural households with and without rooftop solar systems. This model allows rural producer-consumers to become “prosumers.” That means they can sell excess power into the network, where neighboring homes and businesses can buy it in small increments with a mobile phone. If connected to the main grid, this so-called “swarm electrification” approach – which allows grids to grow dynamically in a peer-to-peer, interconnected way – could lead the way for the future of utilities globally.

SOLshare’s model and other firms thinking outside of energy boxes are garnering a lot of attention. To explore just how such grid integration models can work in practice, Endeva, in partnership with Oxford Policy Management and SOLshare as the implementing partner, brought together a group of key stakeholders in Berlin this summer, as part of our ii2030 initiative. The full-day ideation process included technical and policy experts from Hertie School of Governance, Technische Universität – Berlin’s Institute for Energy Technology, Institute for Advanced Sustainability Studies, Grid Singularity and Boond Solar, as well as representatives from the Department for International Development and German Society for International Cooperation.

Our shared goal was to advance both business and technical models that reduce the costs of energy access for low-income communities, increase grid stability and allow for joint energy planning between public and private sectors. As the next step, a collaboration between the government of Bangladesh, SOLshare and the national grid operator (Sustainable and Renewable Energy Development Authority, SREDA), will kick off a pilot to test. The mission is to refine this model by setting up what’s sometimes called a “regulatory sandbox” – an approach used by regulators to relax the rules on a small scale to foster innovation. A sandbox will allow SOLshare and its partners to ensure that the model can operate and scale.

The sandbox will be based on a short concept paper produced by Endeva and its partners, and will serve as the basis for a workshop in Dhaka this September, which will bring together key stakeholders from the government, academia, and donor and development organizations, as well as the private sector. Based on the outcomes of the workshop, the partners will then produce a comprehensive report that examines the technical solution, and includes an economic and financial analysis of the pilot to help adjust the model and ensure its scalability. Through this proof of concept, and with the support of key partners, SOLshare hopes to get 10,000 mini-grids connected by 2030.

Bangladesh is among several countries that adopted one of the strongest declarations of climate action – a target to use 100% renewable energy by 2050. It is also among the countries most vulnerable to the adverse effects of climate change. But with an estimated 65 million people lacking access to a central grid, this declaration seems daunting. While the country is seeking alternatives to reduce its dependence on oil and gas, and with debate raging on in the national hubs, rural Bangladeshi villages have quietly joined the solar mini-grid movement. With the prevailing regulations that prioritize oil- and gas-driven grid expansion, and tariff models that discourage private investment, government intervention is essential to promoting clean energy expansion. Endeva, SOLshare and our partners understand this. The global energy transformation can no longer be stopped. The question is: Will you join us to build the future of utilities in Bangladesh and beyond?

This blogpost was authored by Tatiana Bessarabova, Strategic Parnterships Lead at Endeva. This post was originally part of the NextBillion Series “New Frontiers in Renewable Energy” that explores the dynamic changes reshaping the sector.

Post Views: 1,466
Previous Post
How do NGO and company partnerships for inclusive business work?
Next Post
Join us at BCtA in New York: How tech companies can help create inclusive and future-fit systems